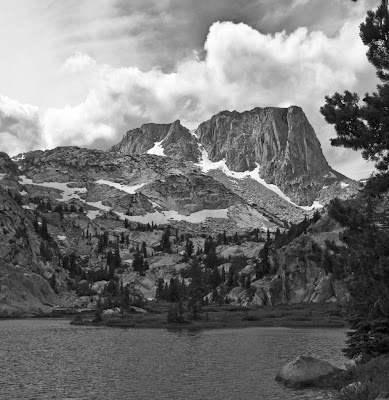 This trip took some planning, since L¾rien had not tried long backpacking or high altitudes before. We did a good practice trip a week or two in advance, but at 1000 feet up - not sufficient practice for 10k passes! Since we had a weekend beforehand at 5000 feet and a cabin at 7500 to start the trip, these things would have to suffice.

After camping with the family at Crescent Lake in central Oregon, we shed some gear for the trip south. Since black bears near Yosemite have equated coolers with food-treasure chests, and much of our other gear would be useless for the remainder of our trip, we off-loaded some things on my siblings. After a few midday farewells we were headed south for an overnight stay in Susanville. Unfortunately a nearby forest-fire made visibility poor and filled my usual motel, but the newer place on the south side of town was very nice for both showering and sleeping. The adjacent restaurant was also very nice, as were the coupons that gave us discounts there! The next day was a shorter drive to Mono Village near Bridgeport, where we repacked our hiking gear and showered one last time. I took a short walk to the trailhead and found where we needed to park for the week; Mono Village charges a fee for this, but the convenience was worth a bit of cash. After a good dinner, a nightÆs sleep and a ham & egg omlette in the morning, we were off!

It was late on day four, and we were out of the wilderness ¢ but we had a long way to go before reaching the car. Worse still was the fact that we were at a pay campsite, and our cash was securely locked in the car! All we could think of was to ask folks at the Buckeye campground if anyone was heading for Mono Village ¢ not likely at dinnertime, but worth a try. Our alternate plan was to beg the hosts to let us stay the night, then get our car and pay them the next day. We met the hosts and asked about who might give us a ride, and asked a couple of people with no success. The hosts met us again and Cal agreed to take us to our car while his wife kept the peace at camp. This wonderful gesture was accepted, although we had promised him more cash tham we had in the car (and the ATM at Mono Village was closed by then). We felt lousy backtracking on our promise, but he was most cheerful about it ¢ what a couple! We then sped to Bridgeport for a room, only to find that it was too late in the day to get one; after a couple of failed attempts we hit a store with an ATM then drove back to the Buckeye camp for a nightÆs sleep. They were most surprised to see us again the next morning, but again chose not to accept our offer of more money for their chauffer work on our behalf.